The ’98 Hotel Gets a Facelift

The refurbishment of The ’98 Hotel was sparked by a simple telephone call from my husband, asking me my advice on colour schemes.  I never dreamed where this would lead when I answered the phone that day . . .. This is a long story, which I’ll explain in installments.

In spring 2018, my husband, Émile Stehelin (the current owner of The ’98 Hotel), asked me to come and take a look at the outside of the building, because he wanted to repaint the exterior. We decided on red with black trim, and we replaced the blue blank blocks that served as windows on the front of the building with advertising signage reminiscent of the 1898 Klondike Gold Rush.

In fact, I have often thought we should have called the Hotel “The 1898 Hotel”, because that is what The ‘98 Hotel stands for.

After selecting the colours for the exterior of the building, we then decided to put up a very distinctive mural on the old blue fence adjacent to the property. This mural was completed by Lancelot at Yukon Apparel, and we are very pleased with it.

After the exterior was painted, and the mural completed, I turned my attention to the lobby of The ‘98, which I deemed to be boring and uninviting. Since The ‘98 has such a rich history—one that many townspeople are unaware of—I went to the Yukon Archives and spent about two weeks poring over old images, and learning the history of The ‘98.

After seeing the old images at the Archives, I decided to make a pictorial montage on the walls of the lobby showing the many transitions of the Hotel, along with the many characters, musicians, and owners over its relatively long life. The montage was completed and installed by Mike Rice, again of Yukon Apparel. It has created a lot of interest.

That is all for this week ladies and gentlemen. Stay tuned next blog for the next big step is into The Bar Room! 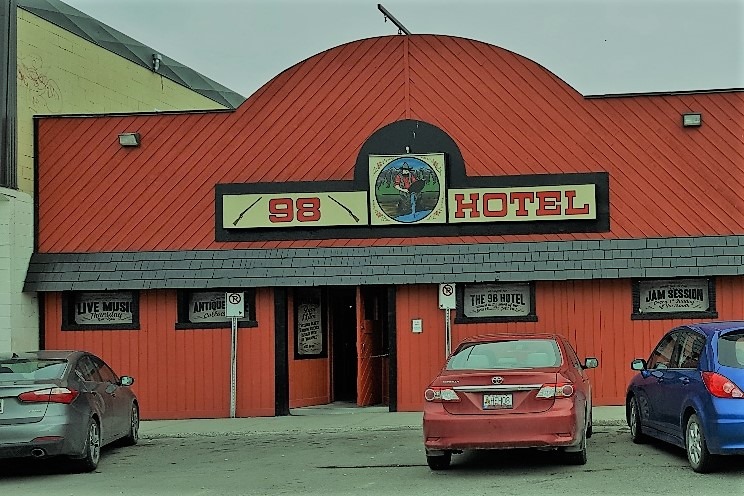